In the June issue of Retail Pharmacy Assistants e-magazine we put the mirror to men’s skin and the issues that affect it, along with suggesting what men can do to help ensure their skin is healthy, and looks it.

2020 Pharmacy Assistant of the Year Benjamin King says a plethora of skin conditions have the potential to affect men.

He lists “acne, acne scarring, oily skin, razor burn, and eczema … to name a few”. “The harsh cold of winter can really dry up the skin, and this is where eczema can occur,” he says.

Brisbane-based Dermatologist Dr Leona Yip agrees that eczema can be more of an issue for men in winter, and can be made worse not only due to skin being dryer at this time, but also because many men “don’t like wearing moisturisers”.

Speaking about common skin conditions affecting men, Dr Yip also points to athlete’s foot, which can be especially problematic for those who wear closed boots for work, such as physical labourers.

“Because of moisture, occlusion and exposure to infection sites, they [men] can get athlete’s foot that [may] go undetected for a while,” says Dr Yip.

“The other one is acne and folliculitis, mainly on the back, either because they’re prone to getting acne on the trunk that’s undetected, or folliculitis from occlusion or restriction from clothing – from moisture and heat.”

Dr Yip adds that “sunburn is another [issue] because lots of men don’t like wearing sunscreen to protect themselves”.

“Shaving rash is another common skin condition,” she says, adding that it’s more prevalent in winter because the air is dryer and “most men don’t like to use moisturisers, especially on bearded skin, which can make shaving rashes worse”.

According to Dr Yip, while the skin of men and women is relatively similar, another key difference is that men typically have “larger hair-bearing areas on their body” making them “prone to getting conditions such as shaving rashes, acne and folliculitis”, which “can be made worse with the trapping of moisture and heat”.

She says general measures include reducing heat and moisture and airing the skin – “giving yourself breaks from tight or occlusive clothing, or your boots, and shaving with electric blades rather than razor blades”.

“Laser hair reduction can be a solution if they can’t resolve shaving rash,” she adds.

Speaking about eczema and dermatitis, Dr Yip underscores the importance of moisturisers, suggesting the use of greasier based options in winter if possible.

“But on hair-bearing skin areas or for men who are hairy, using a lighter based moisturiser would probably be better than an ointment based one that we would usually recommend for people without much hair,” she says. “This is so they don’t get problems with aggravation of their acne or folliculitis.”

Cleansing is also important, she says, and especially so for men who “work outdoors and are exposed to pollution, dirt and grime”.

“Our skin can also produce sebum … and a lot of men are prone to acne on their skin, so it’s important to cleanse the skin so it’s not occluded and causing problems like acne and folliculitis, and making eczema worse as well,” Dr Yip says.

For those men not prone to dry skin or eczema and dermatitis, she says it’s still important to moisturise daily with a lighter based moisturiser, “because if they don’t moisturise, and if they’re prone to acne, the skin can get tricked to produce more oil, and that can lead to more acne breakouts”. 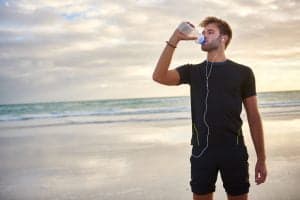 On the role of diet and lifestyle in the management of skin conditions, Mr King says there are “so many things to consider”.

“For example, a high sugar diet can result in increased hormone production, leading to increased sebum production,” he says.

“Eating a balanced diet is a great way to ensure you meet all nutrient and energy requirements. If paired with exercise, this is where your body can really benefit. Exercise increases blood flow to the skin, allowing the blood to carry more oxygen and nutrients to it. For some skin conditions, these days ‘trigger foods’ have been identified that could potentially bring about reactions on the skin if ingested.”

Dr Yip agrees, adding that “eating healthy is important for everyone”.

“Vitamins A, B, C, D and E are great, omega-3 is great for healthy skin in general, and antioxidants are fantastic and also help to prevent skin ageing generally,” she says.

However, Dr Yip emphasises the fact that while “eating healthy foods is beneficial … [specific] vitamin and mineral supplements are only ever recommended if there’s a deficiency that may be affecting the skin”.

To read the full feature as it appears in the June issue of Retail Pharmacy Assistants e-magazine, visit: rpassistants.com.au/magazines/retail-pharmacy-assistants-june-2021/

Too much coffee a bitter brew for brain health