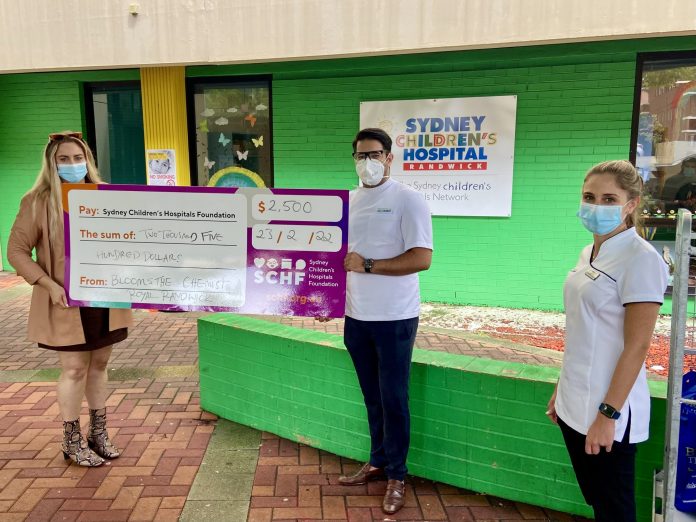 Blooms The Chemist’s Coogee and Royal Randwick pharmacies have combined efforts to support the Sydney Children’s Hospital, raising $2500 and collecting a range of donated toys from the generosity of brand partners and the local community.

Blooms The Chemist Royal Randwick Pharmacist-owner, Rohit Uppal, himself a father of two, has experienced firsthand the incredible work of the Sydney Children’s Hospital and its outstanding efforts to provide a safe and happy environment for sick children and their families.

“The Sydney Children’s Hospital has an amazing group of dedicated people who have always looked after my two little children,” says Mr Uppal.

“After seeing a Facebook post from one of the nurses before Christmas asking people to donate toys for children in the hospital, we felt drawn to support their request.

“The local community really got behind our efforts, which helped us beat our target of $2000.

“We also secured a plethora of toys, which will bring much joy to the children. While the pandemic delayed our efforts to get the toys to the hospital, we were delighted to drop them off today,” he says.

Kate Ferguson, Sydney Children Hospital Foundation’s General Manager – Engagement expresses her gratitude to Blooms The Chemist, and how this will provide children with a little joy while in the hospital.

“For some kids, childhood is far from what it should be. Instead of playdates, there are appointments and instead of sleepovers, there are stays. No child and their family should ever have to go through this, but those that do have our all,” says Ms Ferguson.

“That’s why donations such as those made by Blooms The Chemist are so important, giving children and their families a reason to smile despite the tough times that they might be facing.

“We are so deeply grateful for the support shown by Blooms The Chemist which will make a lasting impact on the lives of many children now and for generations to come.”

The entire healthcare system has been under enormous pressure to provide quality care to the local community, so it was important for Blooms The Chemist to lend a hand.

Mr Uppal reminds people of the ongoing challenges of our healthcare workers and the difficulties they continue to face during these difficult times.

“As a community pharmacy, it’s important we support our allied healthcare providers and support them. The entire healthcare sector has been doing it tough now for a couple of years and our teams in Coogee and Randwick wanted to play their part in some small way,” says Mr Uppal.

Mel Vurlow, a team member at Blooms The Chemist Coogee and Blooms The Chemist Royal Randwick, was delighted with the response and appreciates the strong sense of community and support from brand partners who came together to ensure the fundraiser was a success.

‘The support from brand partners and the generous donations from our customers was really lovely,” she says.

“There was a real strong sense of community, and the sentiment and conversation it generated were really positive. It was great exposure for the hospital in our local community.”