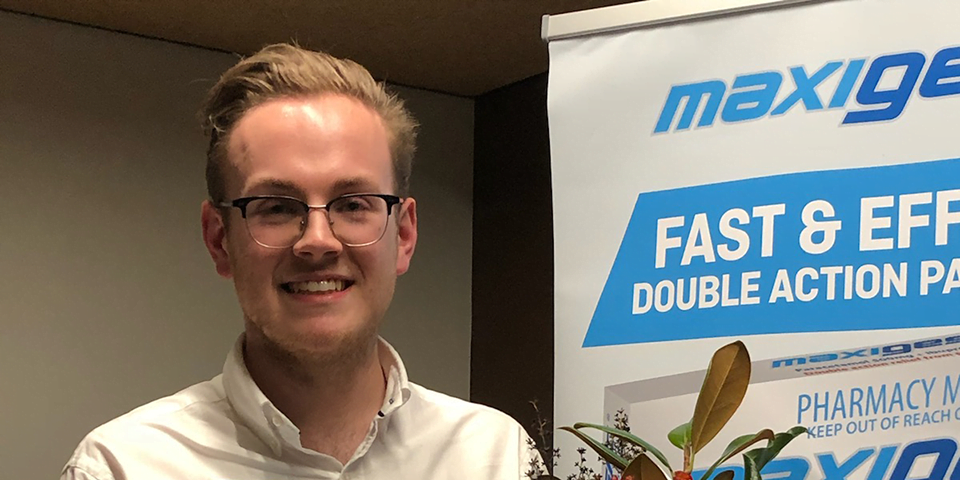 Pharmacy assistant Bradley Miller from Blackmans Bay Discount Drug Store has been chosen to represent Tasmania at the National Finals of the 2019 Pharmacy Guild of Australia/ Maxigesic Pharmacy Assistant of the Year Award (PATY).

Now in its 13th year, PATY is the premier award for Australian pharmacy assistants, recognising and celebrating the ‘best of the best’ in community pharmacy.

Mr Miller will represent Tasmania at the National Finals to be held at the 2019 Pharmacy Assistant National Conference on October 12 in Brisbane. The National Winner will take home over $10,000 in prizes, including cash, a training package, educational conferences and other great rewards.

Judges picked Mr Miller from 11 other state finalists at the Tasmania workshop where each participant demonstrated their pharmacy knowledge, and showcased their skills in customer service and leadership.

“This prestigious award was created to recognise pharmacy assistants who go the extra mile to help their customers and are proactive in developing their own careers,” Mr Tambassis said.

“The calibre of PATY nominees is always extremely high, and each candidate displays a strong commitment to their work and the industry which I am extremely impressed with.

“I congratulate Bradley for standing out as Tasmania’s top pharmacy assistant.

“Bradley’s strong commitment to his role encourages other pharmacy assistants to strive for success and actively contribute to the community pharmacy industry.”

The Tasmania winner of the Glucojel Super Star Award, Jacquie Ritchie from Riverside Capital Chemist, was also announced at the workshop.

Ms Ritchie will be in the running for the Glucojel Super Star Award National title, also awarded at the 2019 Pharmacy Assistant National Conference.

Major PATY sponsor AFT Pharmaceuticals’ General Manager in Australia, Calvin MacKenzie, comments that the manufacturer of pharmaceuticals is excited to once again support the successful future of pharmacy assistants across Australia.