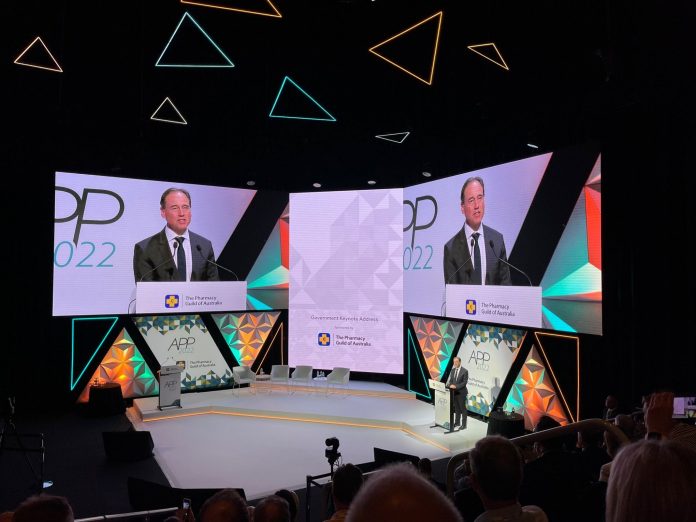 We need a “flourishing community pharmacy sector going forward because it’s not just a business, it’s a health service”, said Minister for Health and Aged Care, the Hon. Greg Hunt MP earlier today (25 March) in what will be his final address at an APP conference.

Referring to the Covid-19 pandemic, Minister Hunt said that the pandemic clearly showed that one of the most important of all pharmacy sector reforms in recent years has been “giving pharmacy that role in community vaccination”.

Congratulating pharmacists on their valiant efforts throughout the Covid-19 pandemic, Mr Hunt said that pharmacists “stayed at their posts through thick and thin” and showcased that they’re not “just running a business – they are health professionals”.

Reflecting on the Covid-19 pandemic, Minister Hunt said that the pandemic highlighted three important things within the community pharmacy sector.

“Firstly, vaccinations,” he said. “There was resistance among some states and territories, and some others to the role of pharmacies in vaccination. And yet, here we are now – 3500 pharmacies delivering, so far, approximately 6.5 million Covid vaccinations and receiving remuneration for it.”

The community pharmacy vaccination breakthrough was immensely important as the pandemic unfolded, according to Minister Hunt, who said that it gave “Australians an option, choice and points of presence”.

Not only that, but it also gave communities comfort in being able to access vaccinations in a timely manner.

“We designed that in January and now we’ve extended it to the end of July to support our concessional patients. I doubt there has ever been a more significant set of advances in terms of pharmacy in any five-year period,” he said.

Describing the last few months as a period like no other – “we may never see another period [like this] going forward” – Minister Hunt said the only way the health initiatives could have been achieved was because of the Government’s belief in small business and in pharmacy.

“We believe in pharmacy, and we believe in the hybrid model of public and private healthcare as the Australian model,” Minister Hunt said. “That’s the critical thing.”

Elaborating further about the various achievements in the scope of pharmacy practice, Minister Hunt pointed to the other successes – “a sea change” – in addition to the vaccines, including service provision in pharmacy.

As the digitalisation of businesses continues to increase, Minister Hunt said that recent years have seen a modernisation of pharmacy, particularly through electronic prescribing.

Minister Hunt continued: “At the same time, we’ve been able to deliver and maintain a continuous dispensing, and that becomes permanent as of 1 July, moving up from where it was before the pandemic to a greater range of groups as of that day.

“And we put in place real-time prescription monitoring, which helps you deal with the health needs of patients who, in many cases, might be in extremis.”

‘The PBS – our fundamental commitment’

While 2800 medicines have been listed on the PBS over recent years, according to Minister Hunt, the guarantee is that these medicines will stay on the PBS.

Minister Hunt, in his APP address, said that “there would never be another period in Australian history … with medicines that were approved, stopped again as they were in 2011”.

“History won’t always tell you the future, but it’s the best guide for the future, and under us, we never stopped testing those medicines. And they’ve been embraced, embraced by the whole of the government,” he said.

Regarding business support, Minister Hunt said that “at least 2000 pharmacies had to draw upon JobKeeper” in the last year.

“And whilst those in the suburbs had some challenging times, but in many cases had very large numbers of people coming to them, those in shopping centres and those in the inner cities faced enormous existential challenges as businesses, where lockdowns were put in place, even in my home city of Melbourne, inner Melbourne is still facing those challenges.

“But 2000 of our community pharmacies were supported with JobKeeper. But going forwards, a 25% tax rate, the instant asset write-off, which we’ve been able to use,” Minister Hunt said.

Speaking about the future – “beyond the five years that we mentioned” – Minister Hunt shared a couple of announcements.

“Firstly, the annual flu program will begin on 4 April,” he said. “We’ve been able to get all states and territories, bar one, so far, to agree to your full participation in the National Immunisation Program [NIP].”

“At the same time, we announced this morning … that the winter dose – the fourth dose for the over-65, for the immunocompromised, for Indigenous Australians over 50, and for those in residential aged care and disability residential care – will be available also from 4 April. And pharmacy will play such a huge role in delivering those.”

Regarding affordable medicines, Minister Hunt announced that “$26million [has been] brought forward to support the programs today for the rest of the year”.

“In terms of the affordable medicines – obviously the PBS – but we’ve already done work with regards to reducing the number of scripts that people need to pay, both the concessional and non-concessional patients, to access the safety net. And there will be more in the coming weeks on this,” Minister Hunt said.

“There will be some very significant announcements in the coming weeks.

“There are differing ways and different approaches, but affordable medicines for patients is something we’ve done, but it’s something we’ll be doing more on, and I give you that guarantee today,” Minister Hunt added.

“And then finally, the last thing as I appear before APP, I want to announce is that our pharmacies, following on from the Royal Commission into Aged Care, will play a fundamental role in dispensing medicines and being embedded within our residential aged care facilities – particularly our oldest, most frail Australians,” Minister Hunt said.

“$345 million commencing on 1 January 2023 over the next four years to support pharmacy involvement,” Minister Hunt said.

“And over the next six months, we’ll work in a period of co-design, with the Guild and with other elements across our health system to design and to implement that model.

Reflecting on the Government and Community Pharmacy Agreement, Minister Hunt said that that was done because of the “immensely important” belief in providing “underpinning support for community pharmacy, as you support the community”.

“The very last thing I want to do is to say to everybody who’s been on the frontline, to all of you who have been there through the pandemic, to all of you have been supporting older Australians and people with mental health challenges and people who are lonely, as, and I couldn’t do this without mentioning this: as the grandson of Phyllis Grant, one of the first female pharmacists in Australia, I look out and it has been my honour to help support you, support the community.

“But I respect you, I honour you, and above all else, I thank the Pharmacists of Australia,” Minister Hunt said.