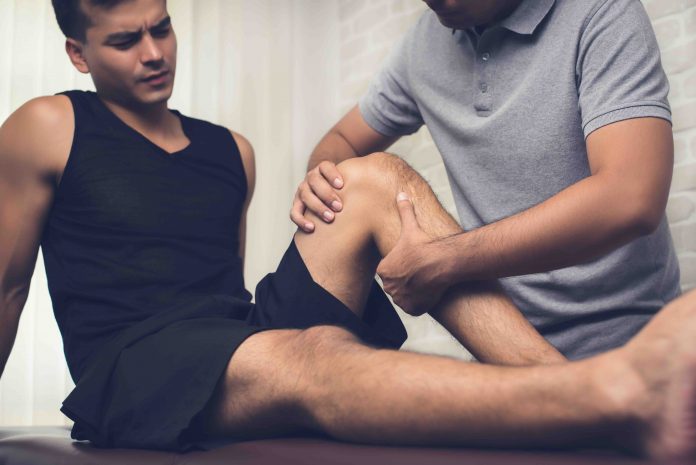 When training for an upcoming fun run or other sporting activity, or during regular exercise, experiencing an injury is frustrating, maybe painful and potentially serious.

In the June issue of Retail Pharmacy Assistants e-magazine, we look at what to do when injury strikes, and the role of pharmacy assistants in this space.

The types of injuries people typically sustain from playing sports and exercising depend on the activity they’re participating in, says APA (Australian Physiotherapy Association) Sports and Exercise Physiotherapist John Fitzgerald.

However, some common types of injuries, he says, include muscle strains such as calf or hamstring strains, and joint sprains such as rolled ankles or lower back injuries.

“There are other simple injuries, such as grazes, cuts and bruises, which people can also sustain from playing sport or exercising,” Mr Fitzgerald said.

“Concussion is also a common problem.”

“These injuries commonly occur due to repeatedly overloading, a lack of strength, or exercise while fatigued,” he said. “However, they can also occur as a result of direct trauma or contact.”

While not everyone will experience soft tissue injuries, a common affliction that affects most people following exercise, training or sport is the dreaded DOMS or delayed onset muscle soreness.

DOMS typically occurs after high-intensity exercise that you may not be accustomed to. While it can be painful and may leave you shuffling around, perhaps struggling to climb or descend a set of stairs, Mr Fitzgerald says DOMS is a normal response to the increased exertion placed on skeletal muscle.

“The demands of a training stimulus cause micro-damage to soft tissues, resulting in pain and discomfort as the soft tissue recovers and regenerates,” he said.

“This is part of the training process.”

However, Mr Fitzgerald says it’s important to “distinguish between muscle soreness resulting from controlled overall physiological damage (such as DOMS) and that from a different mechanism with pathological changes, such as a reactive tendon or overuse injury, eg, bone stress.”

For those who regularly exercise or participate in sports, injury represents a frustrating setback.

Mr Fitzgerald says that to avoid injuries, people can follow some basic steps. These include a thorough warm-up, rest and recovery, adequate hydration and ensuring an active cool-down following activity, which will “go a long way to helping prevent injuries”.

“Other methods, such as injury prevention programs, adequate strength and conditioning, and appropriate and graduated loading during training, can all reduce your risk of getting injuries,” he said.

The best way to manage most soft tissue injuries, according to Mr Fitzgerald, is through the principles of RICER: ‘rest, ice, compression, elevation, referral’.

“This helps with swelling management and healing,” he said.

“However, this management can often be tricky and varies according to the extent of the soft tissue injury.”

Mr Fitzgerald continued: “Good recovery strategies are essential for muscle pain and soreness. Soft tissue massage and post-exercise stretching have a place, but sleep and good nutrition have been found to be the best strategies for muscle recovery after exercise.

“The ‘NO HARM’ principle complements the RICER and is extremely important in the initial 48 hours following soft tissue injury. This means: ‘no heat, alcohol, running/exercising, or massage’. These things can lead to increased bleeding in the injured area, which is detrimental to the repair process.”

One of the first queries a customer may have when an injury strikes concerns how long the recovery process will be. Mr Fitzgerald says soft tissue injuries typically take about four to six weeks to recover, depending on the injury.

“However, in some cases, things settle earlier than this,” he said. “Healing is often dependent on how much blood flow there is to the particular tissue structure. As an example, cartilage will take longer to heal than muscle tissue.”

The role of pharmacy assistants

Following a sporting injury, one of the first places a patient might visit for assistance is a community pharmacy.

This means pharmacy assistants have an important role to play in this space – in helping these customers and assisting with appropriate care and advice.

When recommending products, Mr Fitzgerald says care needs to be taken as the advice depends on the type and severity of the customer’s complaint.

“It’s important that pharmacy assistants ascertain whether an acute soft tissue injury has occurred, or the customer is reporting generalised muscle soreness not caused by a specific injury,” he said.

“In either case, some compression wraps, ice packs, and joint support items – for example, braces, crutches or slings – may be of assistance to the customer.”

In terms of preventing injury, pharmacy assistants can point customers to “pharmacy-stocked products that may limit the extent of an injury occurring”, Mr Fitzgerald says, adding that these include strapping tape or ankle braces for those playing sport.

Customers whose injury fails to improve with the mentioned strategies after more than a week, or those with a concussion, should be referred to see a doctor or physiotherapist as soon as possible, Mr Fitzgerald says.

“This covers customers who’ve had an acute injury or a flare-up of a chronic condition,” he said.

“APA [accredited] sports and exercise physiotherapists are clinicians with advanced training and expertise in the diagnosis, management and prevention of soft tissue injuries.

“They’ll work with the customer to help plan a safe return to their chosen level of activity in a timely manner.”