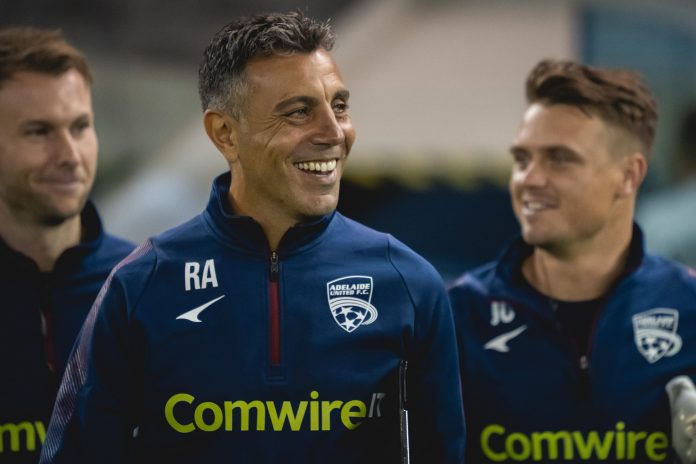 What’s the secret to developing a winning mindset? According to professional soccer player turned coach Ross Aloisi, who we spoke to in this month’s issue of Retail Pharmacy Assistants e-magazine, it comes down to a sense of self-confidence and self-belief mixed in with positive reinforcement from those around you.

Born and raised in Adelaide to “Italian immigrants”, Mr Aloisi, whose surname is synonymous with soccer in Australia, is no stranger to competition. He hails from a family of soccer players: his dad “played for Adelaide Juventus”, now Adelaide City Football Club, and his brother John is famous as a Socceroos star who played at the top level in the UK, Italy and Spain as well as Australia. 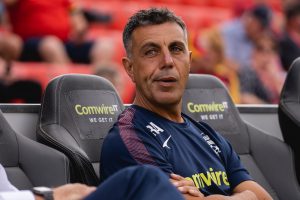 Ross Aloisi played his “whole junior career at Adelaide City”. Crediting his work ethic to his parents, he played in the National Soccer League for the senior Adelaide City side that won the competition in 1992, and represented Australia both at the FIFA Under-16 World Championship and as a member of the Olyroos side in the qualifying matches for the 1996 Summer Olympics. “I loved the game of soccer. It was a dream to play professionally,” he said.

Since his professional playing career ended, Mr Aloisi has enjoyed success as a soccer coach, beginning at “West Adelaide in the local league”, where he was approached to “coach Adelaide United women’s team”, which he did for two seasons.

“That’s where I fell in love with the women’s game and I became the head of women’s football at Football Federation South Australia,” he said. “I coached at the NTC [National Training Centre] and oversaw the underpinning programs and the NTC teams. We went to the nationals and … finished at the top of the table … and won the final.”

After that, he went on to become an assistant coach with the Australian women’s national team, the Matildas, at the 2015 World Cup, a technical adviser to the Young Matildas under-20s side in U-20 World Cup qualifiers, “a scout with the Socceroos at the Confederations Cup in 2017”, and assistant coach at Brisbane Raw.

Building on his passion for the women’s game and recognising inequalities he felt were hampering its progress, such as those related to the amount of training offered female players, Mr Aloisi also went on to launch a female football development program.

“I would go and watch my kids play and see the training the girls would get – all the teams they would play in – and I didn’t believe that the girls got the same amount of training as the boys,” he said, adding that the development program is a “pathway for female coaches as well”.

Mr Aloisi says he’s faced his fair share of both good and bad moments as a player and a coach, even describing some of these experiences as “depressive moments”.

“I wouldn’t say that this is depression [as such],” he said. “But depressive moments [do] set in. So, my program is all about the football and the positive reinforcement in watching these young female footballers develop and have self-confidence and self-belief. It’s just so rewarding.”

Relating his experiences to those of retail pharmacy assistants, Mr Aloisi says “people, in general, are no different to sports players” in that we’re all different and all have “different thought processes”. Just as how a coach may work with players, he points out that, for pharmacy assistants when working with customers, it’s important for them “to understand how people are feeling”.

“There are some who are going through tough times, [so] just understand where the person is coming from and actually listen and show that you care,” he advised. “I guess that’s no different to sport … because you’re going to come across angry people as well … it’s about keeping them calm. I think the most important thing is to let them know what you’re talking about – don’t put doubt in people’s minds – and be very clear and empathetic with some people as well.”

Like the good and bad moments that we all experience generally, Mr Aloisi reminds us that no matter how passionate we are about our careers, we’ll also inevitably face ups and downs within the work that we do.

“There are times when you’re going to be down, there’s no question about that,” he said, adding that overcoming the challenges is about trying to keep a positive, winning mindset, staying curious and continuing to learn.

“Learning is probably the most important thing,” he said. “And don’t take things for granted, because sometimes [opportunities are] taken away from you without you expecting it. So, it’s [important to have a] positive mindset.”

Mr Aloisi says he believes learning, curiosity and positivity have been the secrets to his success.

“I did a lot of reading,” he said. “I think that’s the difference between people who are successful in their field of work, whether in sport or in pharmacy – trying to be the best you can be every single day.”

Success, despite what Hollywood films might have you believe, doesn’t happen overnight like a movie montage. It takes work and requires chipping away at your goal day in, day out. As Mr Aloisi mentions, often it takes reading, learning and undertaking professional development and a level of training (sure, not soccer training in the case of pharmacy assistants, but training nonetheless!)

“Professional development is very important,” he said, adding, however, that you also need to gain practical experience.

“You can read a lot and you can have textbook studies, but if you’re not putting that into practice … or you’re not looking to better yourself, you’re going to become stagnant,” he said.

Clearly a strong believer in constant learning, Mr Aloisi says that “having that mentality to keep learning” is key. 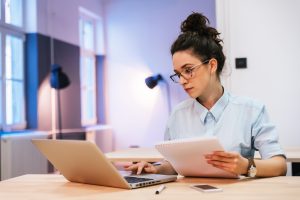 “But experiences are probably the best learning tool,” he said, using his coaching experience as an example. “One thing that the technical coach who asked me to [coach the women’s team] said to me – because I’d said no at first – was, ‘you’ll learn; you’ll learn from this experience’. And I think … by coaching the [women’s] game … [I gained the] biggest learning experience I’ve had in my life.”

Elaborating on this experience, Mr Aloisi says learning the importance of effective communication skills was a most significant development because he found that female soccer players, compared with their male counterparts, generally “take things literally”.

“So, if I said you need to be in this position at this time, that’s what they did every single time,” he said. “I started to learn that you have to be careful the way you word things and make it very clear, so they have a better understanding and don’t take things as literal.”

Pointing to pharmacy, Mr Aloisi continued: “Dealing with people in the pharmacy, especially through this Covid pandemic because everyone is unclear about what’s going on – things seem to change all the time – if you [as pharmacy assistants] are across everything, that’s the key. You need to be across everything that you’re speaking about.”

It’s no secret that the pandemic has contributed to growing concerns around mental health and wellbeing within the community, including among healthcare professionals, so it’s imperative that those on the frontline maintain a positive balance, with which Mr Aloisi clearly concurs.

He reiterates the message that to help maintain positive mental health and to avoid burnout and fatigue, achieving balance is essential – maintaining regular exercise being one of the keys here.

“I didn’t realise when I was playing sport that it was actually really good for [my mental health],” Mr Aloisi said. “Exercise is good for the mind. The hardest part for anyone is to go out there and do it. [But] once you start doing it, it’s fine. It’s getting over that hurdle, that self-doubt, that negative talk in your mind that ‘oh, I’ll do it tomorrow’ – tomorrow never comes. Bite the bullet and go and do it. Because it’s not just good for your health, it’s also good for your mind.”

Mr Aloisi adds that maintaining regular routine and balance will also help you to “feel better about yourself”. He says physical activity supports the development of “self-belief” and “self-confidence” and helps you to feel happy.

“It doesn’t mean you have to go and become a professional athlete,” he said. “Exercise makes you happy, especially if you do it first thing in the morning … and having a shower after that. You’re ready to start your day and you get so much more done, and you don’t feel lethargic.”

While mental health benefits are some of the positives of incorporating regular physical activity in your routine, practising a healthy lifestyle allows you to pass on the benefits to your customers. For Mr Aloisi, the trick to encouraging customers to exercise is “about the information given and [sharing] the benefits of exercise”. 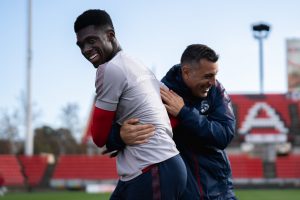 “If someone doesn’t know the benefits of exercising, and you don’t tell them, they’re still not going to know,” he said, adding that sharing what you know with your customers is analogous to showing them that you care.

“For me, showing that I cared was the biggest difference,” he continued, using his coaching as an example. “[It was about doing] whatever I could to put them in the best position to be the best that they could be. And that meant … spending a lot of time with players, to show them that you care.”

Looking ahead, Mr Aloisi says his agenda is more coaching and running his development program.

“I’ve extended my contract with Adelaide United for another year … [and have] the female football development program – I’m looking to expand on that because there’s big demand now,” he said. “I get a lot of people contacting me, especially to set up female programs at their clubs.

He adds that through expansion he also hopes to continue providing a pathway for female coaches “to upskill … and to give them that self-confidence and self-belief”.

“And going back to that positive reinforcement,” continued Mr Aloisi, “I’ve had girls that I’ve coached over the last two years that have actually become coaching assistants … [and] they’re coaching as well. I’ve had them with me in the holiday clinics, and so the positive reinforcement that I’ll give them through our training sessions … [they]re] now taking that into the coaching clinics,” he said.

“So … pharmacy assistants, if they can get themselves into a good pharmacy with a good pharmacist who gives them the education and upskills them, with the positive reinforcement they can become really valuable in the community.”

To read the feature in full as it appears in the Nov/Dec issue of Retail Pharmacy Assistants e-magazine, visit: rpassistants.com.au/magazines/retail-pharmacy-assistants-november-december-2021/