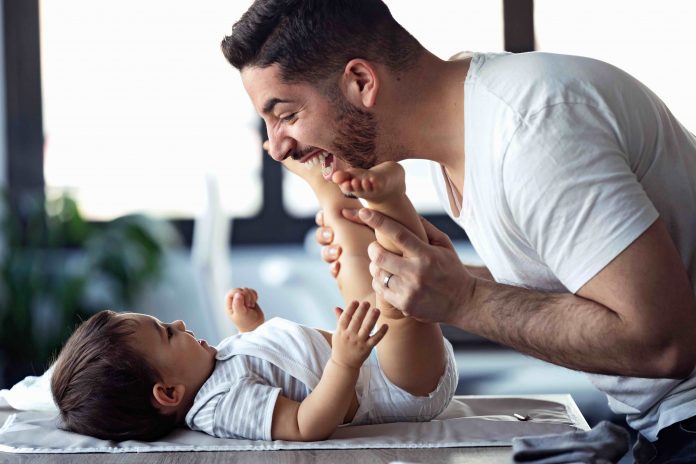 Changing a dirty nappy is one of the least loved aspects of parenthood. Whether a baby is in disposables or cloth, young enough to surprise you with tar-like meconium (more on that later) or old enough to verbally warn you about what you’ll find (‘Mummy, poo!’), peeling off a dirty nappy is never a pleasant experience.

However, it’s important, and not just from a hygiene perspective. A baby’s poo can give us a lot of information regarding their overall health.

“In the early newborn days, the changing colour and consistency of poo let us know that babies are getting enough milk,” a spokesperson for the Australian College of Midwives (ACM) said.

“Later on, when babies start solids, the consistency can tell us whether babies are well hydrated and getting their nutritional needs met. Frequency, amount, colour and consistency vary widely depending on your baby’s age and how they’re fed, but are all key indicators in their overall health.”

A newborn’s first stool will be a dark green, tar-like substance called meconium. While potentially terrifying to see for the first time, this is normal – it’s the baby’s stomach and bowel contents emptying after being in the womb for nine months. These dark green poos often appear for a few days.

After this, there’s a big range of normal when it comes to what baby poo looks and smells like and how often babies poo.

Breastmilk-fed babies may have stools that range in colour from green to yellow and mustard. They may look wetter and looser than you’re used to seeing, but this is normal and not a cause to worry about diarrhoea, says the ACM.

“Babies who receive breastmilk may open their bowels after every feed, as breastmilk is perfectly synthesised by the baby and digested faster and has a slightly sweet smell to it – similar to the smell of breastmilk,” ACM said.

“Breastmilk-fed babies rarely experience constipation, and even if stools are spaced out, should still have six to eight wet, heavy nappies per day.”

Formula-fed baby’s poo may be firmer than that of the breastmilk-fed baby and may have the same colour and consistency as peanut paste.

“The colour can vary from tan, yellow and brown and smells a bit more like grown-up poo,” ACM said.

“Formula-fed babies may experience constipation and begin straining to poop, stools may also become firm or may have a ‘pebble-like’ appearance.”

Once solids are introduced, poo starts to take on a more adult appearance.

“When babies are eating purees, their poo may resemble a slightly thicker paste-like consistency and may be coloured the same as the food they just ate (eg, carrots equal orange),” ACM said.

Several factors can influence the colour of baby stools. That fed breastmilk may have several different colours, from yellow to mustard to green, and all can be normal, says the ACM.

“Occasionally there may be blood in the stool, which could indicate that the woman has nipple damage,” ACM said. “Sometimes it can be green and frothy, which may indicate too much foremilk, which is high in lactose. Also, an iron supplement may make baby’s poos darker, even black.”

‘Poosplosions’ can be a really normal part of a baby’s bowel movements but should happen infrequently. ACM says diarrhoea can be a little hard to pinpoint in a fully breastmilk-fed baby. The stools are normally of a loose and watery consistency, and the symptoms may arise at each feed.

“Babies with diarrhoea may appear unwell in other ways, including such as less interest in feeding, sleepy, fewer wet nappies than usual, tearless crying or a sunken fontanelle,” ACM said.

“In a formula-fed baby or a baby who is on solids, diarrhoea can be easier to identify, with frequent runny poos that may seep out of the nappy and have a different smell from normal poo.”

Constipation in a breastmilk-fed baby is uncommon, so long as baby is gaining weight and has six to eight wet and dirty nappies per day. Constipation in formula-fed or solid-fed babies can be identified by long gaps between passing stools (ie, days) and when passing, babies may seem distressed, in pain and straining to pass their poo, which may be hard with a pebble-like appearance.

“Constipation may be a sign of dehydration, so assess for fluid intake by monitoring baby’s urine output,” ACM said.

“If you’re ever concerned about your baby’s health or their bowel movements you can call a registered nurse from healthdirect on 1800 022 222 or visit your local healthcare provider to review your baby’s symptoms.”

This feature was originally published in the July issue of Retail Pharmacy Assistants e-magazine. To read the feature in full as it appears in the e-magazine, click here.

Taking the BS out of feeling better