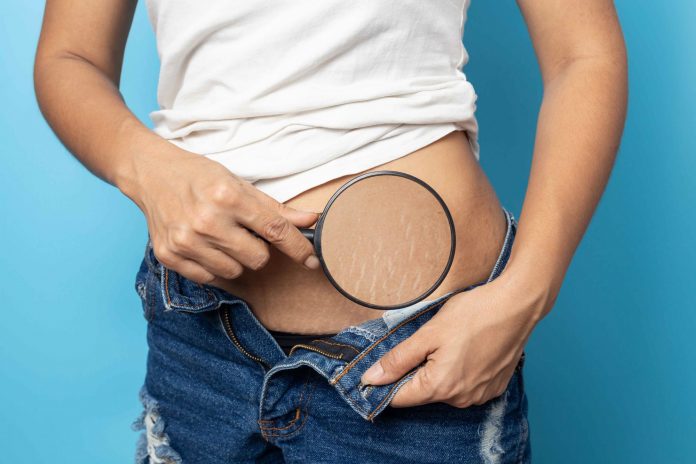 Striae distensae, better known as stretch marks, are an extremely common occurrence. Although affecting women two and a half times more frequently than men1, they can appear on almost anyone and anywhere on the body except the face.

“Stretch marks are lines on the skin that develop because of rapid changes in weight. They are caused by exactly what their name suggests: stretching.”

Going deeper, Stratpharma Managing Director ANZ Lynne Charisis says stretch marks indicate changes in the condition of the connective tissue of the skin, especially changes in collagen, elastin and fibrillin. “When seen under a microscope, stretch marks appear as separations and ruptures in the dermal collagen,” she said.

In the early stages, stretch marks appear slightly raised with a pink to red colour which over time develop a slight purple tinge and then eventually become white and depresses with finely wrinkled lines.

“A study1 that looked at the prevalence of stretch marks in the normal population of pregnant women found the reported prevalence of striae gravidarum (stretch marks that occur due to pregnancy) ranges between 50–9 per cent, with most control groups showing between 60 per cent and 70 per cent developed during pregnancy, depending on the population studied,” Ms Charisis said.

The likelihood of developing stretch marks varies according to skin type, age, heredity, diet and hydration of the skin, says Mr Tan. “Some people are more susceptible to them, but anyone can get them when they experience weight fluctuation. Common stretch mark prone areas include stomach, hips, bottom, thigh, and chest as the skin expands and stretches.”

In males, the most common sites for stretchmarks are the outer aspects of the thighs and the lumbosacral region.

No consensus on the cause

There is a large number of published research looking into the causes of stretch marks, however, there is still no general consensus from experts as one good theory, says Ms Charisis.

The main causes under discussion are:

Hormonal changes: “Striae are developed in times of increased glucocorticoid production such as during puberty, pregnancy, with Cushing’s syndrome or with exogenous steroid use,” Ms Charisis said.

“High steroid hormone levels have a catabolic effect on the activity of fibroblasts and decrease the deposition of collagen in the ground substance of the dermal matrix. Other clinical publications confirm that hormonal change is one of the main reasons for stretch marks development.”

Defect in the basic structure of elastic tissue: “This theory was posted after a relationship was found between striae and increased vaginal lacerations at birth,” Ms Charisis said. “An extracellular matrix defect may also explain why overstretched tissue leads to ruptured collagen fibres and hence striae in some individuals who experience rapid weight change such as pregnancy or Cushing’s syndrome.”

Mechanical stretching: “Leading to the rupture of the connective tissue framework during pregnancy, rapid increase in the size of particular regions of the body during adolescence, obesity and rapid increase or decrease in weight,” Ms Charisis said.

Dermatologist and founder of ODE Dermatology Dr Shyamalar Gunatheesan, says prevention of stretch marks is the most effective “treatment”.

“Even the laser therapies we have in the dermatology office are not that effective, she said.

“So, in terms of pharmacy products, there’s no harm – and it makes sense – to use something that’s got a hydrating effect, because if your skin is less dry and hydrated, it’s going to give you the appearance of the stretch marks looking a bit better. There have been some studies of maybe using a complex of the antioxidant oil or silicone over time very slowly improve it. But it’s not a treatment as such.”

“If you can hydrate the skin really well, maybe pre-application of moisturiser, using a vitamin A cream that will help with your elastin production or fibroblast production, that will also maybe prevent the appearance of stretch marks.”

Drinking enough water and keeping well-rested is also beneficial: “We know that overall skin wellness is related to gut health,” Dr Gunatheesan said. “Prevention is key here, and it’s all those safe, conservative methods that you can do that might have that additive effect.”

“Massaging it into skin twice a day may help to reduce the possibility of stretch marks forming during pregnancy, teenage growth spurts and rapid weight gain,” he said.

“Bio-Oil Skincare Oil is the number one selling scar and stretch mark product in Australia and is known and well-loved by Australian consumers for close to 20 years.”

In April 2022, Skincare Oil Natural was added to the range to provide an option to consumers who prefer an all-natural formulation.

According to Ms Charisis, Stratamark is the only over the counter product that has clinical evidence to show it both prevents and treats stretch marks.

“Stratamark is a medical product registered with the Therapeutic Goods Administration and has clinical studies in over 500 pregnant women,” she said.

“Stratamark reduces the risk of developing stretch marks down to 18.2 per cent versus the reported 60-70 per cent in the normal population of pregnant women. This is a reduction of 43 per cent.”

“While Stratamark is more expensive than the oils and moisturisers on the market that claim to prevent stretch marks, it is better value as it works.”

“If you’re needing to get it treated, better to go and see your dermatologist while the stretch marks are fresh, when it’s red, as opposed to when it’s white and that scar is really set.

“That’s where I think your pharmacist assistant is very powerful.”

This feature was originally published in the April issue of Retail Pharmacy Assistants e-magazine.